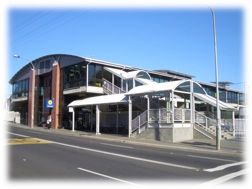 Lidcombe railway station is a major junction station on the Sydney Trains metropolitan railway network of Sydney.  It is the junction point of the Main Western and Main Southern railway lines.  Lidcombe is served by the T1 Western Line and the T2 South Line, and is the present terminus of the T7 Olympic Park and T3 Bankstown lines. Lidcombe is the 21st most patronised railway station in Sydney (out of a total of 176 stations), with an average of 10,340 passengers boarding per day.

As a resident in Lidcombe, you can enjoy the Sydney Aquatic Centre, Sports Centre and the many recreational activities available for the whole family by using the Olympic Park services which depart from Lidcombe Railway Station only.  Lidcombe has 6 platforms, five for ordinary suburban services, and one for the Olympic Park services, which operate every 10 minutes between Lidcombe and Olympic Park stations. The station is served by eleven to sixteen trains per hour each way, with additional trains during weekday peak hours.